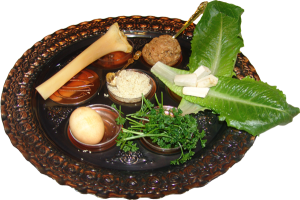 This, the second half of my review of The JPS Commentary on the Haggadah, unfortunately, I have run out of time to highlight all of the interesting information which Tabory puts forth in this succinct volume. We are well into April, and I need to focus my attentions on the April J-BOM review (Visions of the Fathers

by Rabbi Abraham Twerski – one of my favorite commentaries on Pirkei Avot). There is, however, one last thing I want to make sure I hit.

I have often been troubled over the last decade or so of celebrating the seder meal in regard to the seeming absence of the answers to the Four Questions in the Maggid. Tabory makes a connection between the mandate of R. Gamliel and the questions. Gamliel requires the “mention” (in context, the “discussion”) of three things at the seder meal: pesach (referring to the meat of the Pesach offering), matzah and maror. He states,

Examination of the best manuscripts of the Mishnah and early haggadot show that there were originally only three questions, which may be summarized as “Why do we eat only matzah? Why do we dip (referring to the dipping of the maror)? Why do we eat only roasted meat?” Thus it seems to be a reasonable assumption that R. Gamliel’s explanations of the significance of Pesach, matzah, and maror are the answers to the three questions, although distanced from them in the haggadah.1

In essence, the original three questions were changed over the centuries to deal with the change of custom (particularly the absence of the pesach after the destruction of the Second Temple), but the answers continued as a type of curious provocation which were not explicit in their connections to the new questions. I feel this is a reasonable explanation which tends to put in a missing piece of the puzzle surrounding the haggadah.

I’m sure I’m not the only one who has struggled to try and make some kind of connection between the Questions and the answers. In my Greek-oriented mind (which has to have a clear connection of all the dots), when I created my own haggadah, I attempted to make a clear connection of a question with its answer. Rather than maintaining the mystique and encouraging questioning, I have formulaically given both the problem and the solution. But this is what we are accustomed. Rather than chewing our own food, we have someone else chew it for us. Although this particular example is innocuous, the overarching snapshot is that this is a sad commentary on our culture and the spiritual state of the majority of believers.

There are also a few instances in which Tabory actually rejects interpretations of the text which have traditionally been thought to be written as anti-Christian polemic. It is interesting to hear his opinions on this, because he appears to be unbiased in his approach (he takes the opposition position a time or two as well). The two examples he gives (and defends as not being anit-Christian in origin) are: 1) the de-emphasis of Moses as the redeemer, and 2) the re-interpretation of the Afikomen as the “bread of distress/affliction.” In both cases, Tabory looks at the earliest historical sources (including Philo, an interesting source considering the topic) and refutes (or cast serious doubt on) the interpretation.

Lastly, the listing of the various differences between haggadot across cultural and linguistic lines is fascinating and much attention has been spent in tedious comparisons between them. Tabory does a masterful job at presenting these with fine granularity in the areas that are significant enough for examination. If you’re interested in this type of examination of one of the most central texts of Judaism, The JPS Commentary on the Haggadah is a welcome addition to your bookshelf.