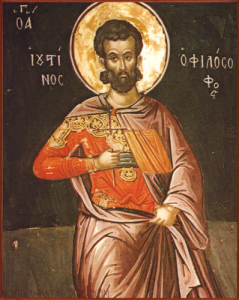 The other day I reviewed the excellent work, In the Shadow of the Temple, by Oskar Skarsaune. Today, I would like to elaborate on a few of his thoughts in regard to the place of Jews and Gentiles in the people of God. In looking at the development of Christianity in the years after the destruction of the Holy Temple in Jerusalem, Skarsaune observes some changes that begin to develop around the time of Justin Martyr (c. 100-165 C.E.). He notes the ever-increasing Gentile influx and subsequent sway over what has been to this point a sect of Judaism, and uses the writings of Justin Martyr (and others) to show how there began to be a rising arrogance and intolerance among non-Jewish believers for their Jewish brethren.

With regard to how non-Jewish believers began to view Jews and Jewish believers at this time, Skarsaune notes that the dialogue between the believing Gentile and the non-believing Jew grew to an intensity which had yet been unsurpassed in the history of Israel’s self-criticism. Skarsaune shows a change from what he labels “Jewish self-criticism” to “anti-Jewish slogans” in the dialogue against unbelieving Jews. Whereas the Church Fathers use many of the same words as the prophets of old in their condemnation of Israel’s failings (directed at the unbelieving Jew’s failure to recognize the Divine voice yet once again), there is a marked change from the prophetic voice which longs for repentance, and the condemning slander of voices such as Justin Martyr.

All this changed radically when this way of preaching penitence to Israel passed into the hands of Gentile Christians without this deep sense of solidarity with Israel. In their hands, these harsh Old Testament words to Israel became a weapon to discredit the Jewish people as disbelieving by nature, while the Gentile Christians exalted themselves as more willing to believe and obey God. 1

He shows evidence of this through the following quote from Justin Martyr:

If you [Jews] will confess the truth, you yourselves cannot deny that we [Gentiles] are more faithful than you in relation to God. For we, having been called of God by means of the mystery of the cross, which is so despised and full of shame; and (suffering) punishments even unto death for our confession and obedience and piety, … we, I say, endure all things lest we should deny Christ even in word. But you were redeemed from Egypt with a high arm and a visitation of great glory [there follows an extensive enumeration of all the wonders  worked by God for the benefit of Israel during the desert wandering]. In spite of all this you made a calf, and eagerly committed fornication with the daughters of the aliens, and committed idolatry, and did so again afterwards when the land had been entrusted to you with such great power.… You are convicted by the prophets, even after Moses’ warnings, of having gone so far as to sacrifice your own children to demons, and of having, in addition to all this, dared so much against Christ, and still do dare. (Dialogue with Trypho 131.2—133.1) 2

For in Justin the enumeration of Israel’s sins is no longer meant to be a call to repentance and return to God. In Justin it has become something quite different: Justin takes the biblical record of Israel’s sins to mean that the Jews have a natural inclination toward disbelief and sin, while on the other hand the Gentiles have a natural inclination toward belief and obedience. The ruthless Jewish self-criticism contained in several passages in the Old Testament—unparalleled in the ancient world and one of the finest fruits of mosaic and prophetic teaching—is misused by Justin as if it were some kind of ethnological description of the peculiarities of the Jewish people. 3

We can see the correctness of his observation. No longer is the apex of the message repentance, but only vilification. To understand how this turn of events takes place, we have to get into the minds of those believers within this time period. Although we have no absolute way of do so, I believe Skarsaune does an excellent job at connecting the dots. He notes the following:

In the second century one observes a marked change. The Christians of Gentile origin by now far outnumbered those of Jewish origin. Gradually, this fact came to influence the concept of the church. In Justin Martyr, the church is an essentially non-Jewish entity. It is made up of believing Gentiles, and over against this church of the Gentiles Justin places the Jewish nation as essentially non-believing. The border between believers and non-believers tends to coincide with the border between Gentiles and Jews. True, Justin knows of Jewish believers. But whereas in Paul the Gentiles are added to the true Israel of Jewish believers to share in their inheritance, in Justin it is the other way round: the few Jewish believers are added to the church of the Gentiles to share in their inheritance.

This shift of perspective had far-reaching consequences. While in Paul the Gentiles share in the promises given to true Israel, in Justin the promises are transferred from the Jewish people to the church of the Gentiles. This church replaces the Jewish people. It takes over the inheritance of Israel while at the same time disinheriting the Jews. One might express this development by using Paul’s image from Romans 11. In Paul, God has cut off some of the branches of Israel’s old olive tree, and in their place he has grafted some wild branches—the Gentiles. In Justin, God has cut down Israel’s olive tree, and in its place he has planted an entirely new tree—the church of the Gentiles. Onto this tree he has grafted a few branches from the old tree—those branches are the believing Jews.

Once Christians began to think this way, they would naturally pose the question of election as an either/or alternative: Either the Jewish people or the (Gentile) church is the inheritor of the Old Testament heritage. No one in antiquity fostered the idea of God having two peoples; it had to be the church or the Jews. In this way, Christians of the second century were never able to assert their election in Christ without at the same time lashing out against the Jews. 4

Skarsaune’s observations are adept. Although we haven’t seen any proof, per se, in his summary we can see a logical progression in which the spiritual superiority and arrogance of non-Jews is becoming a serious issue. The identity of the “people of God” is in question, and in order to define this term, someone has to “win” this title.

1 thought on “Engrafting or Replacement – Part 1”