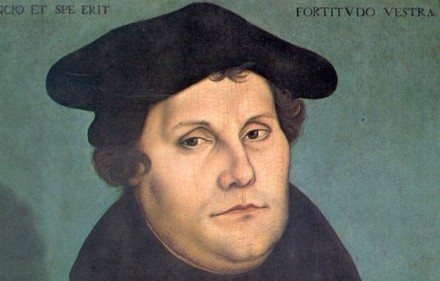 Continuing with examples of misinterpretation, I would like to present one additional, more recent example of how a teacher’s words can be replicated, but his original message completely obscured by his followers. This particular example, however, has far-reaching implications and one with which the church struggles today. It is that of Martin Luther and the Protestant church.

We all know of Martin Luther as the leader of the Protestant Reformation. He is know by his rejection of the practice of indulgences by the Catholic church (of which he was currently a part), and his theological “discovery” of justification through faith, which has become the foundational doctrine of the Protestant church. His questioning of papal practice and refusal to submit to papal authority caused his excommunication from the Catholic church and forced his hand at creating a “protest” movement against the Catholic church in which papal authority was not at the helm.

Protestants across the globe are indebted to Luther for his revelation in regard to justification through faith. This theological premise has been the cornerstone which has shaped Protestant faith and practice since the time of the Reformation. However, for the last century or more, this confession has experienced a metamorphosis in its interpretation and application. The Christianity of pre-holocaust Germany is an illustration of how this misunderstanding of Luther’s message allowed Christians to believe that their mental acknowledgement of the work of Christ secured their eternal salvation and precluded them from living a life of faithfulness in the present world.

Dietrich Bonhoeffer, German Lutheran pastor, theologian and Holocaust martyr, is best known for his outspoken opposition to Hitler and the Nazi regime. In his preeminent work The Cost of Discipleship, Bonhoeffer explains the problem that arose between Luther’s original teaching of justification through faith, and the practical application of the Protestantism of his day.

“When he spoke of grace, Luther always implied as a corollary that it cost him his own life, the life which was now for the first time subjected to the absolute obedience of Christ. Only so could he speak of grace. Luther had said that grace alone can save; his followers took up his doctrine and repeated it word for word. But they left out its invariable corollary, the obligation of discipleship. There was no need for Luther always to mention that corollary explicitly for he always spoke as one who had been led by grace to the strictest following of Christ. Judged by the standard of Luther’s doctrine, that of his followers was unassailable, and yet their orthodoxy spelt the end and destruction of the Reformation as the revelation on earth of the costly grace of God. The justification of the sinner in the world degenerated into the justification of sin and the world. Costly grace was turned into cheap grace without discipleship.”  1

Bonhoeffer is writing in a time when Christianity in Germany had been diluted to the point of almost no-return. It is this context that allowed Hitler to rise to power, and the Nazi party to sweep through Europe like a brush fire. For the most part, Christians were more concerned about theology, doctrine & creed than living out lives dedicated to Christ. Like today, Protestants generally did not see a disconnect between Luther’s doctrine of faith and grace, and their modern application. However, Bonhoeffer observed that at the place where theory and practice should meet, they went their separate ways. In his terminology, the justification of the sin, rather than the sinner, became the preeminent function of grace. Therefore, the Christian became justified in his sin, rather than being justified as a new creation.

Instead of maintaining the bar & recognizing that there will be times in which we fall short as disciples, and thus allowing the grace of God to pick us back up, brush us off and set us back on the path again, we have chosen the path of less resistance. We have chosen to lower the bar (or remove it altogether), and justify our inability to conform to the image of Messiah as merely “who we are.” As Bonhoeffer puts it, “The Christian life comes to mean nothing more than living in the world and as the world, in being no different from the world, in fact, in being prohibited from being different from the world for the sake of grace.” 2

Bonhoeffer saw what persists until today — a diluted Christianity in which confession of creed has swallowed the confession and renunciation of sin. We now have a world in which Christianity has become accepted, but at the expense of its integrity. Bonhoeffer described what he saw as follows:

Bonhoeffer allows us to see another example of how the teachings of someone can be distorted and misapplied by his followers. As we can see by this example, misinterpretation and misapplication can have alarming results. If we have done so with theologians such as Luther from which we are only a few centuries removed, how much more so have we done with the likes of Paul and Jesus? We will return to this discussion when we discuss understanding the message of Jesus.