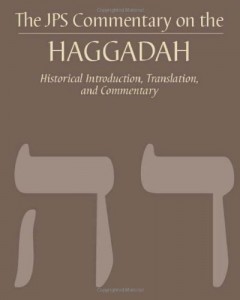 I have officially jumped on the J-BOM wagon, and I appreciate the call to action by fellow-blogger, Derek Leman. If you are not sure of what this “J-BOM” thing is about, Derek explains it for you here. This is my first installment of my review on the JPS Commentary, be sure to check back for subsequent posts, as well as posts reviewing a new book each month.

The JPS Commentary on the Haggadah from the Jewish Publication Society is the first book for all of us J-BOMmers to review. It was very nice to be able to know about this resource prior to Passover this year, as I believe it will enhance my personal experience of Passover.

Let me begin by saying that this commentary is not for the average person wanting to find out how to better celebrate Passover. It is for those who have celebrated the feast for several years and have wondered about the origins of all of the strange rites, traditions and expressions found within the haggadah. However, even within this group, it is probably not a blanket recommendation for addition to your reading list. This commentary is a scholarly approach at peering beneath our current text of the haggadah through textual & higher criticism, comparing our current text to many early variations of the text that, although extant, are not in use. Tabory makes note that “the earliest sources that help us understand the modern seder are those found in talmudic literature” (p.1). And although he does make reference to arguments regarding Christian scholarship regarding many related topics, including the Last Supper, he does not consider the Gospels of the New Testament a valid source from which we can learn anything regarding the earliest seder expressions. Maybe this is due to the fact that his position is somewhat opposed to any kind of interpretation of the seder experience from the believing community. Maybe this is due to his not considering the Last Supper of Jesus to be a seder meal, as many have reasonably argued1. Whatever the case, rabbinic literature is his primary source, and the majority of these works appear to come from the Cairo Genizah (in the case of what Tabory terms the “Eretz Yisra’el” tradition) or sources such as the siddurs of R. Amram Gaon and R. Saadiah Gaon (both from the 9th century, and follow the “Babylonian” tradition).

In regard to this vast sea of literature, Tabory appears to have a knack for pouring over massive volumes of historical & rabbinic works and compressing the essentials into a very small space. He makes many assertions about the origins of the haggadic elements, however, which may be problematic for the average reader. Yet in his pulling on the sacred threads, he is deeply reverent and respectful of traditional interpretation and understanding. Tabory does a thorough job at peeling back layer upon layer of text to uncover the earliest records of the Passover tradition in a way that is both curious and rewarding.

I plan on posting several insights and thoughts brought up by Tabory, but one of the things I would like to note first is regarding the historic nature of the haggadah. In regard to this we can be certain of one thing: The haggadah has never been a static text. Although our present text represents the current and definitive expression of the seder experience, it has not been without challenge or modifications historically. It has been a very dynamic text; one which has changed throughout the centuries in order accommodate the every-changing circumstances of each generation in order that one may be able to regard himself as though he actually left Egypt, as it says: “He brought us out from there in order to bring and give us the land which He had promised to our ancestors” (Deut. 6:23). Although many might view this as a corruption, or paganizing of the service, it can also be viewed as proof that the haggadah has ever been a living organism, bent on elucidating the purpose of redemption in each generation. Tabor notes that “the Torah does not prescribe exactly how the post-Exodic paschal meal should be eaten nor does it prescribe any ceremony connected with it” (p. 4). This is noteworthy in that each generation and community have adapted this ritual in some way or another throughout the centuries, not re-creating it as some would have us do2, but adapting it. Personally, I think this fortifies a Messianic position in that we should be able to produce Messianic versions of the haggadah unapologetically, without feeling we have tipped any sacred cows. We are only adapting to our needs to express Hashem’s redemption according to our understanding, the same as each of the previous generations.

With that said, let me begin my actual commentary with an interesting note regarding the traditional four cups of wine. In his overview of the seder and its history, Tabory makes an observation regarding these cups. He states, “The texts of the second cup, which embodies the story of the Exodus, and those of the fourth cup, Hallel or songs, are unique to this evening. Some of these texts belong to the tannaitic stratum of the haggadah, having been added between the destruction of the Second Temple (c. 70 C.E.) and the redaction of the Mishnah (c. 220 C.E.), while other were added even later” (p. 7). Although here, Tabory speaks of texts in association to the additional cups3, I believe we might also be able to deduce that these cups may not have been in use during this time either. Thus, we have a better explanation of why it appears that during the Last Supper Yeshua only drinks from two cups, rather than the traditional four.

Another interesting note that seems obvious, but I have failed to recognize it until he brought it out, is the fact that the Maggid (the telling of the Exodus) and the Shulchan Orech (the actual Passover meal) are really not connected. The Maggid actually takes place prior to the meal, rather than surrounding or in relationship to the meal. This is due to the post-Temple era in which the modern seder evolved. Since there was no lamb to be the focal point of discussion for the evening, the discussion naturally shifted to the expressions of redemption that could be represented tangibly in the evening. Hence the four cups representing the four4 expressions of redemption found in Exodus 6:6-7.

This is all I have time for now. I will post more soon…

2 thoughts on “J-BOM: JPS Commentary on the Haggadah, Pt. 1”