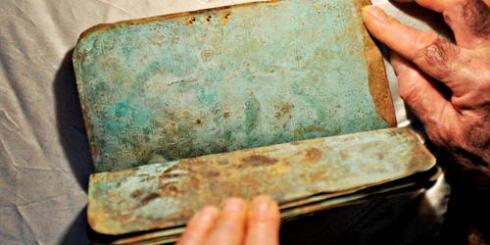 In Israel, a new archaeological “discovery” of sorts is buzzing and making bold claims that they may be the next “Dead Sea Scrolls.” They include a collection of scrolls as well as 70 lead codices (ancient scripts bound in book form, rather than as scrolls). However, we have conflicting reports on the nature of these “newly found” artifacts. They are owned by “Hassan Saeda, a Bedouin farmer in Galilee who says they have been in his family’s possession since his great-grandfather found them in a cave in Jordan, a century ago.” Although there is still a lot of skepticism surrounding these artifacts, there are some strong voices that are willing to attest to their authenticity, wanting to avoid another possible Shapiro Affair.

Right now we seem to either have two camps on the theory of origins and contents of these manuscripts. However, this may be a result of the various text which may be present among the collection. According to one source, these manuscripts “could hold a contemporary account of the last years of Jesus.” According to another source, they appear to be Kabbalistic with references to Bar Kochba and Shimon bar Yochai, and “the nature of the content indicates a magical incantation style of writing.” Both reports confirm that the manuscripts are not just comprised of Hebrew or Greek text, but images and symbols which are in need of deciphering. Some of these codices are also said to be sealed and have created speculation that they may possibly be “secret writings referred to in the apocryphal Book of Ezra.”

How can these theories be so divergent? Just look at the early theories surrounding the Dead Sea Scrolls, and all of the controversy and imagination that has lead to cloak & dagger speculation in the last half a century, including John Allegro’s laughable “The Sacred Mushroom and The Cross.” When indecipherable manuscripts come to light, it seems sensational imagination rules the roost.

One legitimate reason for the diverse interpretation may simply be there are multiple types of documents contained within the cache, not dissimilar to the Oxyrhynchus Papyri. The different scholars are merely examining two different texts, which contain seemingly polar information. The quick evidence I see for this is the one article’s description of the codices, compared to the photo made available in the other article (the photo I have included at the top of this article). In the first article, the codices are described as being “tiny credit-card-sized volumes.” However, in the photo you can see that this particular codex is much larger than this.

Either way, we will have to wait and see what turns up by way of translation and authentication. Either way, it will be an exciting journey. Hopefully, the reports will be out sooner than later, and the texts of these discoveries will find their way to the public much sooner than the Dead Sea Scrolls, the Cairo Geniza Fragments or the Oxyrhyncus Papyri.

I have just been made aware of these other (and more extensive) articles on this discovery:

Also, here is another (better) image of a codex: