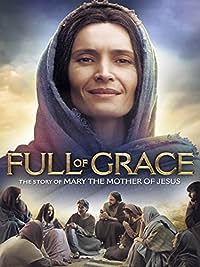 Disclosure: I was sent a complimentary copy of Full of Grace by FishFlix for my honest review.

“Full of Grace: The Story of Mary the Mother of Jesus” is a film released in 2015 by Cinedigm Home Entertainment LLC. It is a story about Mary that supposedly takes place ten years after the resurrection of Jesus. Although fictional in nature, it may have some apocryphal origins that I may not be familiar with. It takes place at the end of Mary’s life and draws from church legend about the apostles being gathered to her before her passing. Although the movie does not describe how, and does not even emphasize the point of all of the disciples being there, it seems like the viewer is lead to assume this based on the number of men attending her near her death. The actual script only introduces the viewer to a few of the disciples, primarily Peter and Andrew. The entire film revolves around the refusal of Peter to take leadership of the newly emerging sect of Christians. It touches on the problems with Jews and Gentiles coming together and the ever-developing “heresies” that would begin to plague Christianity going forward.

Peter was cast as an indecisive and almost incompetent disciple who has nearly lost his faith in the years following the resurrection. Rather than receiving his empowerment to continue the faith with boldness from Jesus, Peter is on the brink of giving up. He is spiritually strengthened and renewed, however, by the final words of Mary as she departs this life.

From my perspective there were both positive and negative aspects to the film. There were a few things in particular that I appreciated about this film. One of these is that it was a very family-friendly film in regard to objectionable content. There was nothing in the film that I would not feel comfortable showing my four-year-old daughter. The other main thing, which I was actually pretty excited about, was that there was a scene in which Peter was giving thanks over bread and wine and he prayed the prayers handed down to us in the Didache—the prayers my family and I recite over bread and wine each Friday night. This was actually a touchpoint for us as a family. Last, the cinematography and scoring of the film were commendable and even beautiful at times. While the acting wasn’t too bad, Mary’s character was definitely the strongest.

Unfortunately, for me the negative aspects of this film outweighed the positives. First, the film moved extremely slow. It could not hold my children’s attention, and it could barely hold mine. It is a dialogue-driven movie and there is little to no action and really no plot. Second, there was little to no effort put into making sure this film was historically accurate. There is no understanding of Jewish culture or religious perspectives of the first century, and it comes out strongly in both the scenes and especially the dialogue. Third, it did not strive to place the disciples back into their Jewish context. It’s only been ten years after the resurrection and they are already talking like Protestants and Catholics. This leads me to my next issue. There were numerous issues, mainly in dialogue, that were anachronistic in nature. So much so, that I was too distracted by these to be able to enjoy the film.

Last, the theological tones of this film were overwhelmingly Catholic. With the title being, “Full of Grace” (although Scriptural in origin, it is an obvious allusion to the Hail Mary prayer) I had my suspicions from the beginning. After I watched it, I began doing research on the company that produced it. It was apparently made by an organization called Outside da Box who specializes in creating videos targeting Catholic teens. My suspicions were confirmed. While this is not necessarily a bad thing—let’s face it, all denominations create things to promote their own idealogical perspectives—it should probably be mentioned from the onset that this film is infused with Catholic theology.

Overall, I would give “Full of Grace” a 2.5 out of 5 star rating. If this is the type of film you think you might enjoy, you can purchase it at Fishflix.com, along with hundreds of other faith-based films.