Many people have disparaged Judaism as being filled with paganism, particularly orthodox Judaism’s rabbinic leadership. Some even claim that it is satanic at the root (G-d forbid). Many people have had similar remarks about Christianity, especially when they discover Messianic Judaism and discover all that Christianity has forgotten over the last two thousand years in relationship to it Jewish origins. Everything is then questioned, and its origins suspect. For instance: What is the origin of the Christmas tree? Was it originally an asheroth pole? What about the Easter bunny, and the name “Easter” itself? Are they connected to Ishtar, the pagan goddess of fertility? Was the star of David originally a magical symbol used by the pagans? Questions such as these continue to pound away at both Judaism and Christianity.

Biblical Archaeology Review recently published an article examining pagan symbols in Jewish worship, specifically looking at the various synagogues unearthed in Israel which portray zodiac symbolism in their floor mosaics. The most famous is the Beth Alpha synagogue, which sports a very large floor mosaic (28×14 meters, roughly 90×30 feet) whose central panel shows the complete zodiac. It is described as follows:

Figures of four women were at the four corners, with inscriptions (in Hebrew) identifying each as a season of the year. Inside the square was a wheel, 3.12 meters in diameter, with a smaller circle (1.2 m) in its center. The wheel was divided into 12 panels, each with a figure and a name identifying it as a sign of the zodiac. And in the center, a man was pictured driving a quadriga (four-horse chariot) through the moon and stars. Rays of the sun were coming out of his head; it was clear that he was Helios, god of the sun.1

This article continues to describe in detail several such synagogues found in Israel with this type of imagery. Although there is still some mystery surrounding the use of these symbols (particularly in a house specifically designed for study & worship), I feel the author’s explanation of them plausible.

This brings a lot of questions to mind (for which I do not have the answers). When and how were pagan symbols introduced into Judaism and Christianity? What do we “accept” and what do we “reject”? Where do we draw the line? How far is too far? Are there such things as coincidence? What are the “majors” and what are the “minors” in all of this? If others believers continue to unknowingly incorporate pagan symbolism in their sincere worship, what is our responsibility? These are a lot of difficult questions. Fortunately, someone has done a lot of homework on the subject. 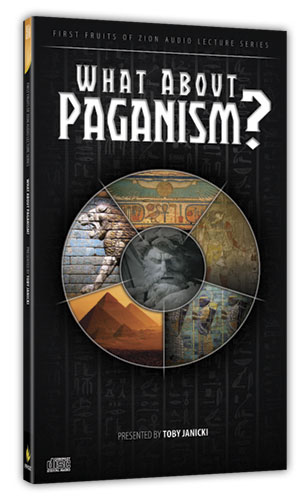 First Fruits of Zion has recently published a 4-disc audio teaching on this very subject. It’s called “What About Paganism?” Toby Janicki tackles this subject and brings in a ton of information relating to both Christian and Jewish practice which may or may not be pagan in origin and gives suggestions as to our response. This is a good starting point to get some honest discussion on the table in regard to this topic, rather than living on our assumptions. It is based on historical evidences and the teachings of Yeshua. When we abide in the teachings of our Master, Yeshua, we will “know the truth, and the truth will set you free” (John 8:32).