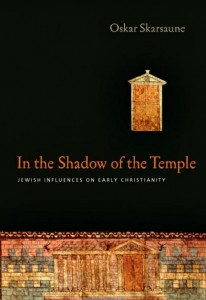 In the Shadow of the Temple :
Jewish influences on early Christianity
by Oskar Skaursaune
455 Pages
InterVarsity Press, 2002

Until reading this book, I was totally unaware of Skarsaune and his literary offerings. Now, I realize how deprived I have been.

In In the Shadow of the Temple, Skarsaune begins his account of the development of Christianity by first peering into the last two centuries of the Second Temple period, beginning with the Hasmonean dynasty and the subsequent influence of Hellenism upon Jewish religion and culture. From there he sets the stage to masterfully guide us through the first few centuries of the development of Christianity, culminating in “The Constantinian Revolution” of the early fourth century.

Throughout each chapter he weaves the story of the early believers with the fibers of secular historical records (such as Pliny the Elder & Tacitus), Jewish writings (Talmud, Apocrypha, etc.), and the writings of both Jewish and non-Jewish believers (Didache, 1 Clement, etc.). Skarsaune examines as much of the evidences as possible in order to place each piece of the puzzle with care. He is very articulate without being verbose. Following are some highlights from this work.

The impact of this way of looking at first-century Jewish and Christian history has been enormous, and is still felt in New Testament scholarship. There is no doubt, however, that a basic “change of paradigm” is taking place. For one thing, Jewish scholars have argued with great conviction that Jesus should not be placed outside Pharisaism, but within it: when Jesus debates with Pharisees, his own positions can be shown to agree with those of other Pharisaic authorities. In other words, Pharisaism itself was complex; it comprised different opinions; it could comprise those of Jesus. Jesus’ debates with Pharisaic opponents is therefore an intra-Pharisaic debate…It is meaningless and grossly anachronistic to picture Jesus, Peter or Paul as debating with “Judaism” or its representatives, as if they themselves were outside and represented something else, a non-Jewish position. 1

In this quote, Skarsaune rightly recognizes the intra-house debate between Jesus and the Pharisees of his days, rather than viewing Jesus as an outsider as is typically the case. Jesus has not come to topple the biblical religion in order to establish a new one through subversive tactics. He is in the order of the prophets of old, condemning hypocrisy and calling his people back to repentance through proper relationship to the Torah given at Sinai.

In another insightful passage, Skarsaune hits upon another often overlooked truth in regard to the standard model of prayer for the early believers:

In the days of Jesus the wording and sequence of the elements of the synagogue service had attained such stability that we are fully justified in speaking of a synagogal liturgy. The echoes of the synagogal prayers in the Lord’s Prayer and other early Christian prayers demonstrate that this liturgy was well known to Jesus and the early disciples. We should not think that the early Christians were antiliturgical in their worship gatherings. It is no accident that in Acts 2:42 Luke does not say that the early community “devoted themselves to the apostles’ teaching … and prayer,” but to “the prayers,” which suggests fixed patterns. All the evidence points to the synagogal liturgy as a source for those prayers. 2

When examining the letters of Ignatius 3, Skarsaune aptly notes:

What we observe in Ignatius may perhaps best be described as a loss of Jewish context. 4

In this observation, I believe Skarsaune has hit upon one of the primary dysfunctions of modern Christian faith. We have built our house of faith from the top down, rather than from the bottom up due to our subconscious disconnect with the Tanach (the “Old Testament”) and the patriarchs. Yes, Jesus is the pinnacle of our faith. But in order to truly understand his work, we must first have an intimate relationship with the broad foundation of the Tanach, which was laid out in order to elucidate that which would come after it. Without this understanding, the majority of the Scriptures (i.e. the “Old Testament”) becomes exactly as Ignatius views it, as “a history that was past and finished.”

To conclude, the present work from Skarsaune is one which should be in the library of anyone who is serious about understanding the development of Christianity in the first few centuries, and how the apron strings began to be cut (whether for the good or for the bad) from Mother Judaism. Skarsaune does an excellent job at reducing and articulating a plethora of information into layman’s terms in a way which is easily comprehendible and manageable. I look forward to collecting his other offerings as well.

4 thoughts on “Book Review: In the Shadow of the Temple”