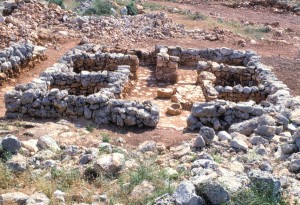 For a long time, archaeologists and biblical minimalists have renounced the idea of an Israelite captivity in Egypt corresponding to the biblical record of the Exodus. Today, evidence has been published to the contrary. Manfred Bietak, director of the Institute of Egyptology at the University of Vienna and of the Austrian Archaeological Institute in Cairo, has published an article in the Biblical Archaeology Review (BAR) citing several evidences of the existence of ancient Israelite slaves in Egypt.

Although he draws on a number of sources, Bietak’s impetus was the recent unearthing of Israelite-style four-room homes found among Medinet Habu, opposite Luxor in Egypt near the remains of the temple of Ay and Horemheb. He compares these homes to the many which have been found in excavations in the land of Israel, and notes the distinct similarities of pattern & function, making a clear point to say they are not Egyptian at all in design.

In 2009 there was evidence found in Egypt of the biblical Joseph. The coins contained both Joseph’s Hebrew and Egyptian name, along with an image of a cow to represent Pharaoh’s dream. You can read about it here and here.