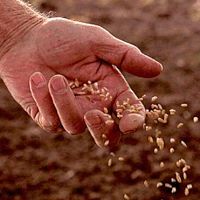 While studying FFOZ’s Torah Club volume 4, Chronicles of the Messiah (a year-long, weekly commentary on the Gospels), this morning, I came across a few things I would like to share in regard to Yeshua’s Parable of the Soils. While this is typically known as the Parable of the Sower, I think his emphasis is more on the different types of soils than the sower. The sower and the seed are the same in every instance. It is only the different soils that affect how the seed is received.

First, a word about parables:

‎”Christian readers sometimes misread and misunderstand the parables of the Master because they assume that they contain deeply symbolic, secret, esoteric, mysterious truths. Christian teachers enjoy extracting unanticipated and hidden meanings from the parables of the Master, but such interpretations are ordinarily farfetched and far removed from the simple intended meaning. The rabbis did not use parables as riddles. They used them as illustrations.” 1

We have to be careful in our interpretation of parables in that we don’t want to “over read” them and “super spiritualize” them as was often the case with the church father Origen. Our job is to catch Yeshua’s intended singular portent, and then apply that principle to our lives as his disciples. With this in mind, I would like to give you a list of how Daniel Lancaster interprets the symbolism in this popular parable:

Where has the seed fallen in your life? What kind of crop are you producing?

3 thoughts on “The Parable of the Soils”